Who cares for the fate of the tiger? 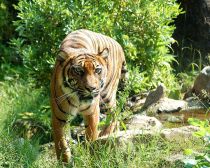 Few people realize how much urgent, end-of-the-line conservation is actually carried out by conservation organisations.

Reading another blog recently, I was musing about how quickly people assumed that the high-profile issues, such as Japanese whaling in the Southern Ocean, were the sole concern of the conservation movement, when I read someones sharp quip that ‘the world would be a better place if the ‘hippie greenies’ did something about all the other issues as well.’

Well today marks an excellent opportunity for me to profile just how fundamental and important this sector is in staving off the inevitable; especially when Governments fail to act.

From an estimated 100,000 at the beginning of the 20th century, the New York-based Wildlife Conservation Society (WCS) calculates wild tiger numbers between 3,200 to 3,600, across southern Asia and into Russia. Tigers are in critical decline because of human encroachment, the loss of more than nine-tenths of their habitat and the growing trade in tiger skins and body parts.

Without doubt, wild cats are some of the most beautiful, iconic, and charismatic species roaming the planet, spanning many of the world’s wildest landscapes.

Despite decades of knowledge that the Asian tigers were in trouble,  Governments who hold ‘sovereignty’ over the habitats these tigers have called home are doing little. Conservation activity is happening beyond (and sometimes despite) Governments.

To give a small but representatives snapshot:

In the 6,400-square-kilometer Huai Kha Kheang and Thung Yai Wildlife Sanctuaries on the Myanmar border, armed patrols funded by the WCS, ward off poachers and have stabilized the tiger population of more than 100, along with animals such as the banteng which they prey on. In Indonesia the WCS Wildlife Crimes Unit laid the foundations for the local authorities to arrest wildlife trade suspects for attempting to illegally sell Sumatran tiger skins.

The Buddhist Monks of the Wat Pa Luangta Bua Yannasampanno Forest Monastery in Kanchanaburi, Thailand dedicate their time and space to a wildlife sanctuary for tigers. Many of the tigers at the Thai temple are the cubs of parent tigers killed in the wild.

Yesterday on day 3 of the Indian Tiger Census, volunteers coordinated by Government conducted the census and reported over 15 direct tiger sightings in the Bandipur Tiger Reserve, Biligiri Rangana Temple wildlife sanctuary, and the Nagarhole forests.

There are many of these stories of the conservation sector doing the leg work. Sometimes this work is all that is happening; sometimes it contributes to Government efforts. Often the work receives little or no acknowledgment from Government process, and rarely are these efforts reported in the media.

In two days time Ministers from the 13 countries with tiger populations will hold a first-ever meeting in Hua Hin, Thailand to write an action plan for a tiger summit in September in Russia, where Prime Minister Vladimir Putin has championed the survival of the tiger.

The purpose of this week’s meeting, writes Michael Casey of the Washington Post, is to elicit promises of more money for conservation and to persuade countries to set tiger population targets, organized by the Global Tiger Initiative,  a coalition formed in 2008 by the World Bank, the Smithsonian Institute and nearly 40 conservation groups. They aspire …

‘to a world where, by 2020, wild tigers across Asia will no longer face the risk of extinction – and will live in healthy populations within high conservation value landscapes that are managed sustainably for present and future generations.’

I have no doubt in my mind that the conservation movement participants of the Global Tiger Initiative are fully committed to the aspiration, and I commend them for their hard work. I do wonder though if the Government World Bank and individual Government support is truthfully apparent. We will see in the months after the meeting if the ‘paper commitments’ materialize into action.

I note that Alan Rabinowitz, president of Panthera, has said “All we have gotten from ministers and heads of state is rhetoric … Putin loves tigers but (Siberian) tiger numbers are plummeting in the Russian Far East.” This is especially pertinent given Russian tigers are now as low as 300.

I wonder if it is time we question to what extent these issues should be left to the opaque processes of Government decision-making. Democratically elected or not, there are some parts of Government activity and priority setting that are beyond the easy reach of the public.

Far too much Government process automatically premises ‘nature’ as a resource for humans. Value is tied to the human economy, and the success of management is measured by percentages of species or systems remaining intact. A tree becomes timber; a mountain or a gorilla family become ecotourism destinations; a school of bluefin tuna becomes a fishery; a tiger becomes a Chinese medicine.

We might wisely question if putting a development value on components of Earth is the complete answer. Did we really intended to place an economic value, or have a sustainable use, for everything? Or are some entities simply ‘beyond use’ and worth of protection for their intrinsic value as entities, not as resources that we own?

Acknowledging that at least some animals are ‘beyond use’ brings forward implications spanning across philosophy, law, science and policy. However, for me, such a challenge to the things as they are is the next logical step.

Should humans adjust to accommodate the tiger’s rightful place in the natural environment?

For now, I thank the efforts of the conservation movement. A thread of vibrant color will be lost to the world when the last wild tiger is gone.

Update 2/2/10: This post has been amended slightly today to fix some sloppy typing about the range of wild tigers … thank you my friend !